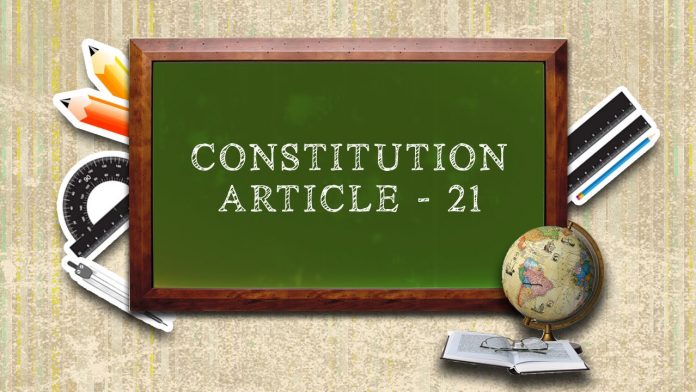 “no person shall be deprived of his life or personal liberty except according to procedure established by law”.

Thus, a person can be deprived of his life and personal liberty if the following conditions are fullfiled, namely:

As describe above, Article 21 of the Constitution of India states that, “no person shall be deprived of his life or personal liberty except according to procedure established by law”.

The term “Life” under Article 21 does not mean a mere animal existence , rather it means to live life with human dignity, right to livelihood, right to privacy, right to compensation etc. It ensures all freedom and advantages that would go to make life agreeable.

In Nirmal Singh v. State of Punjab, ( AIR 2009 SC 984), it was held by the Court that fair investigation and fair trail are concomitant to preservation of fundamental right of an accused under Article 21 of the Constitution. A victim of crime is equally entitled to a fair investigation.

In Kharak Singh v. State of Uttar Pradesh, ( AIR 1963 SC 1295), with approval of Field, J’s observation in Munn v.Illinios, (1877) 94 US Page 113, the Court quoted and held , that be the term “life” as here used something more is meant than mere animal existence. It means right to life with human dignity.

Liberty of the person is one of the oldest concepts to be protected by national courts. As long as 1215, the English Magna Carta provided that, No freeman shall be taken or imprisoned… but… by the law of the land.

The Supreme Court of India has rejected the view that liberty denotes merely freedom from bodily restraint. It observed that liberty encompasses those rights and privileges that have long been recognized as being essential to the orderly pursuit of happiness by free men.

In Kharak Singh v. State of Uttar Pradesh, with approval of Field, J’s observation in Munn v.Illinios, the Court quoted and held , that be the term “life” as here used something more is meant than mere animal existence. It means right to life with human dignity. It further extended scope of personal liberty.

This case came before the Supreme Court as a writ petition. 5 judge-bench gave decision allowing petitioners who live on pavements and in slums in the city of Bombay to stay on the pavements against their order of eviction. The court also held that right to livelihood is a right to life as per Article 21.

This case came before the Supreme Court as a Public Interest Litigation against State of Rajasthan and Union of India by Vishakha and other women groups. demanding enforcement fundamental rights for working women under Articles 14, 19 and 21 of the Constitution. For this, Vishaka Guidelines were issued. The judgment also provided basic definitions of sexual harassment at the workplace along with provided guidelines to deal with the same.

In this case, the Court rejected that right to employment at the present point of time can be included as a fundamental right under Right to Life under Art. 21.

The Supreme Court had held that death penalty was not violative of articles 14, 19 and 21. Where judge was to make the choice between death penalty and imprisonment for life, the choice of awarding death sentence was done in accordance with the procedure established by law as required under article 21

The Court took cognizance of the environmental problems being caused by tanneries that were polluting the water resources, rivers, canals, underground water and agricultural land. The Court issued several directions to deal with the problem.

In the case, the Supreme Court laid down detailed guidelines to be followed by the central and state investigating agencies in all cases of arrest and detention till legal provisions are made in that behalf as preventive measures and held that any form of torture or cruel inhuman or degrading treatment, whether it occurs during interrogation, investigation or otherwise, falls within the ambit of Article 21.

The apex Court in the infamous case of A.D.M. Jabalpur v. S. Shukla held, during prevailing of emergency in the country, right to move to the court for enforcement of fundamental rights guaranteed under Article 14, 21 and 22 stands suspended.

The case is considered a landmark case as it gave a new and highly varied interpretation to the meaning of ‘life and personal liberty’ under Article 21 of the Constitution. Also, it expanded the horizons of freedom of speech and expression. The case saw a high degree of judicial activism.

MC Mehta filed a Public Interest Litigation for escape of poisonous gases by a plant in Bhopal. The court in this case extended the scope of Article 21 and 32 of the Constitution of India. The case is also famous as Bhopal Gas Tragedy.

the case was regarding noise pollution caused by obnoxious levels of noise due to bursting of crackers during Diwali. The Apex Court suggested to desist from bursting and making use of such noise making crackers

Call for Papers for Volume XII, Issue II of the NLIU Law Review 2023

Major changes under the Draft Prevention of Cruelty to Animals (Amendment) Bill, 2022

What is PESA act? Madhya Pradesh to implement PESA