The accused chief will be sentenced on Monday. Heavy security is deployed across Punjab and Haryana to confront any violence outbreak.

New Delhi is put on high alert along with several cities across the two states. Some news reporters were reportedly injured after violent Dera supporters attacks after the conviction of their chief.

Army is on stand by in the state. Dera followers in lakhs have gathered in towns across the states with Panchkula, Sirsa, Bhatinda emerging as major flash points. Two train stations were set on fire in Punjab in the towns of Malout and Balluanna. 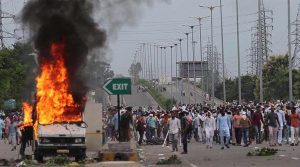 The accused Ram Rahim has denied the charges of sexual exploitation of two female followers in 2002. Government offices in Panchkula and Chandigarh remained closed today along with schools and colleges.