It is not uncommon to find strange animals and pets, taking a trip with their owners on a flight. Some passengers are allowed to carry their pets into an aircraft for the purpose of getting emotional support from their pets throughout the journey.

The practice of allowing emotional support animals into an aircraft is common in the United States. This is because the State recognizes “emotional support” animals. So, you can see animals ranging from miniature horses to kangaroos (although too big for a flight), parrots, pet dogs and cats, sitting with their owners inside a US flight. 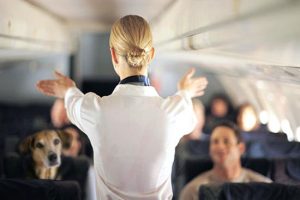 Persons who intend to fly with their emotional support animals will usually inform the Airline of this.

For example, an airline refused to allow a ‘support peacock’, called Dexter, into the flight because the peacock’s size and weight did not meet the guidelines.

Also, airlines reserve the right to streamline the animals which they consider as “emotional support animals”.

For example, United Airlines banned goats, frogs, hedgehogs, and some other animals from entering into the aircraft.  Recently, the airline streamlined animals falling into the “emotional support animals” to include dogs, cats, and trained miniature horses that can fit into the cabins.

To intensify the matter, the airline now requires that passengers who intend to bring their emotional support animals into the flight must show a ‘doctor’s note’.

Some other countries, like the UK, do not recognize “emotional support” animals. As such UK airlines will not allow strange animals into the cabin. But it is not uncommon to see service dogs (i.e. guide dogs and dogs which help disabled people) allowed into British flights. There are however, ongoing campaigns for the recognition of ‘emotional support animals in the UK.

What Is The Newly Signed Abortion Law Of Texas All About?