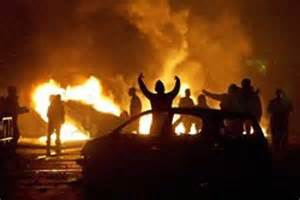 Whenever any force or violence is used by an unlawful assembly, or by any member, in prosecution of the common object of such assembly, every member of such assembly comes within the scope of being guilty of the offence of rioting.

Whoever is guilty of the offense of rioting  shall be punished with imprisonment of either description for a term which may extend to two years, or with fine, or with both.

Classification of the Offense-

Whoever is guilty of the offense of rioting, being armed with a deadly weapon or with anything which, used as a weapon of offence, is likely to cause death of the person, shall be subjected to the punishment of imprisonment of either description for a term which may extend to 3 years, or with fine, or with both..