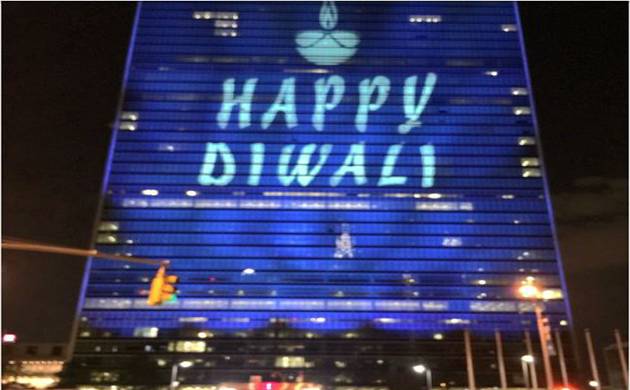 Diwali which is India’s biggest and the most celebrated festival, was commemorated for the first time at the United Nations, with the world’s body

The façade of the UN headquarters was light in bright hues and the words ‘ Happy diwali’, combined with an image of an traditional diwali diya was projected onto the building.

India’s ambassador to the united nations, Syed Akbaruddin tweeted, “Lighting up. @UN lights up for #Diwali for 1st time”.

Akbaruddin in his next tweet also thanked the General Assembly President Peter Thomas for the initiative.

He also in his another tweet, tweeted a picture of passers-by clicking photographs of the building and another picture of the UN building that was light up in bright blue for Diwali and said, “Light over darkness, hope over despair, Knowledge over ignorance, good over evil- the UN lights up. Happy Diwali!”.

The UN Secretariat building will be lit up for Diwali from October 20-31.