Indian film actor Salman Khan receives death threats on social media. Salman Khan was accused in 1998 in the Jodhpur blackbuck case and concerning the case, he was scheduled to be present in the Jodhpur Court on September 27th, 2019 in connection with the Blackbuck poaching case as it was mentioned by the court that his absence on the due date would result in canceling his bail in the said case.

The threat posted on social media carried a photo of Salman Khan with a red cross on the photo and with a message, “Salman you may think that you are above the Indian law, but the Bishnoi community and the Suopu party has given you a death sentence. You are guilty in Sopu court”.

Sopu stands for the Student organization of Punjab University and the message of threat against Salman was posted by Garry Shooter. 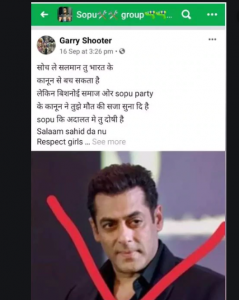 Other actors of the movie- Sonali Bendre, Tabu, Neelam and Saif Ali Khan too were said to be with him.

Back in 2018, Salman Khan’s security was tightened after a gangster named Lawrence Bishnoi issued a chilling threat against Salman.

Lawrence had said, “what we will do, will do it openly. Will kill film actor Salman Khan in Jodhpur. Then, they will get to know”.

Lawrence is said to have many cases registered against him in various states in India, be it murder, extortion or firing. Speculations are being made that the death threat posted for Salman on social media and earlier by Lawrence could be in connection to the blackbuck case.

What Is A Transfer Petition And How Can Matrimonial Cases Be Transferred From One State To Another?