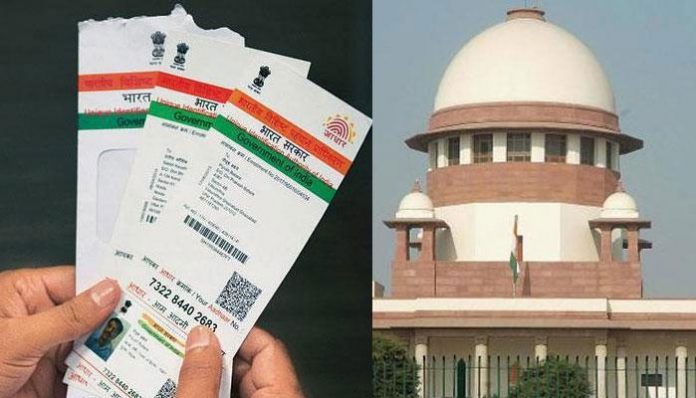 The Supreme Court on Friday ordered banks and telecom service providers to specify the last date for linking bank accounts and cellphone numbers with Aadhaar in their messages to customers.

The bench of Justices A K Sikri and Ashok Bhushan was hearing petitions challenging the validity of the Aadhaar Act and the decision to link bank accounts and mobile numbers with the unique identification number.

The petitioners’ counsel told the court that the messages sent by banks and telecom service providers, warning that their services would be deactivated if Aadhaar was not linked, were creating panic among customers, and the last date should be mentioned.

Attorney General K K Venugopal, appearing for the Centre, said these were only verbal assertions. Justice Sikri then replied: “The press is here and I didn’t want to say this. But I am also getting the messages.”

“We make it clear that in the messages sent by banks and telecom service providers, the date of December 31, 2017 and February 6, 2018, shall also be indicated as the last date of linking Aadhaar with bank accounts and mobile numbers,” the bench said.

The court, however, refused to order an interim stay, saying all Aadhaar-related cases had already been marked for hearing in the last week of November. The court said there was no need for an interim stay as there was time till December 31 to link Aadhaar to bank accounts, and till February 6 to link it to mobile numbers.
Senior Counsel Arvind Dattar, appearing for a petitioner, said the notification for linking Aadhaar to bank accounts was issued under the Prevention of Money Laundering Rules and this was illegal.

The bench said the concerns were important, but added that the petitioners could raise these before the bench that is slated to hear all Aadhaar-related matters in the last week of November.

“There is no doubt that these arguments need consideration. The matter is going to come up in the last week of November, and the time (to link Aadhaar with bank accounts) has been extended till December 31,” the bench said.

The AG said the Centre was seized of the matter and had appointed a committee under former Supreme Court Judge B N Srikrishna to draw up a data protection policy, which is likely to be submitted in the first week of March.

Meanwhile, in an affidavit filed on Thursday, the Centre told the court that the last date for linking bank accounts to Aadhaar may be extended from December 31, 2017 to March 31, 2018. “Therefore… existing bank accounts will not be made non-operational for not linking with Aadhaar” till March 31, 2018, it said. But for opening new accounts, the unique id or the number of enrolment for the scheme has to be furnished.

On October 25, the Centre told another bench headed by Chief Justice of India Dipak Misra that it was open to extending the March 31, 2018 deadline for making Aadhaar mandatory for social welfare schemes.

On linking cellphone numbers with Aadhaar, the latest affidavit says that it is being done as per the orders of the apex court, and hence the deadline cannot be modified unilaterally.

Procedure to Pay Traffic Challan Online and Offline in India

Procedure to get an International Driving Permit in India